Solder is a metal or material that is used to join electrical wires. Be it to create a connection in electrical circuits or just joining two wires, solder comes handy. It’s basically metal glue in electronics.

When you are to complete a path in an electrical arrangement for the current to flow, you can take the help of soldering to join pieces or wires.

So, does solder conduct electricity? To put simply, yes, it does conduct electricity in most cases. In fact, we use it primarily to establish a permanent joint between points or wires in a circuit for the current to flow through. In this article, you will get to know all about this regard. Read on to explore more.

An electrical arrangement generally consists of electrical circuits, wires and other electronic components. We use copper wire to carry the current into the circuits or motors. The electrical cables are then cut into preferable sizes. We can twist two of the copper wires together if we need to make connections.

But it is extremely risky and unstable. Not only can it damage the device but it is also very dangerous to humans. So we need a more stable and safer option.

Solder is a great option in this case. A soldering iron melts the metal. And a drop or a fraction of the drop of the metal help join wires or complete an electrical path in a circuit.

Solder connection is very much stable once it solidifies since it is integrated into a circuit or solder wire. Also, it’s less prone to cause humans any harm. Unless one literally puts fingers right in the tiny solder joints, it is harmless.

In electrical circuit boards, solders are meant to complete a path for the current to flow. So they have to be made of conductive elements. Solder connections cannot be of dielectric materials in a circuit, since it will rather block the path.

It is a pretty simple debate actually. Solders are metals, and metals are conductive elements. So solders are simply conductors of electrons. So this is the answer to the most-asked question – Does electricity go through solder? Yes, it mostly does go through solder.

However, there are some metals that are not as good conductors as others. For example, Rosin core is a non-conductive solder unless it is used in very high temperatures. Their electrical conductivity is relatively less than others. If those metals are used in soldering, then the path or joint that is created is less or non-conductive.

Another question that is quite often asked about solders is “Does solder conduct heat?” The answer is, they definitely do in almost all cases.

Soldering is basically a metal glue to join other metals or materials. Not only the electrical applications but there are some other fields that use soldering too. This technique is used in plumbing applications to fill out small gaps or to join materials. Intricate designs in jewelry are also carried out by using soldering. Sheet metal work, stained glass work also uses a soldering process.

You may sometimes solder in the wrong places. Faulty soldering is absolutely not acceptable. That’s because soldering means creating a current path of certain resistance. If it’s done in the wrong place, the entire circuit design along with the device can be damaged.

Fortunately, there is a way to desolder. This means you can undo your faulty solder. A solder wick and a desoldering pump are the basic tools that we use to desolder.

Problems caused by the conductivity of solder

Soldering is intentionally used in circuits for their conductivity to create an electrical connection. However, some circuits are way too detailed and complicated. They sometimes have a very intricate circuit design and their electrical components are placed very close to each other. So their connections are a tad bit complicated.

Metal beads of soldering can be too big for these circuits. In this case, more than one solder joint or electric path can be made. This may result in overlapping of connections which will cause a short circuit. so overall this will result in bad solder connection in small circuits. PCB designs sometimes fail due to this. Eventually, the entire design will collapse and get damaged. Sometimes bubbles of solder occur on the metal surface due to mostly high-temperature issues. These are some common solder problems.

Do all metals conduct electricity?

Yes, all metals conduct electricity. However, their resistance comes to play while discussing their conductivity. The higher the resistance, the lower the conductivity.

But do keep in mind that all metal conduct electricity more or less. And soldering is done using metals. So choose accordingly.

From the discussion above, we realize that soldering is mainly focused on joining little metal pieces or wires. And that creates a path for current to flow through. So does solder conduct electricity? Yes, solders do conduct current. Otherwise, we would not use such things in circuit connections, right?

But depending on their resistance and other characteristics, their conductivity can vary. Hopefully, this article was helpful enough to give you some general information about this topic.

However, if you have further inquiries, we suggest you research particularly for your specific application or issue. 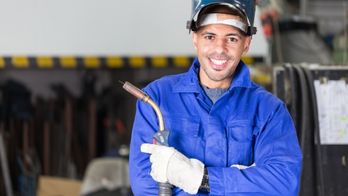 If you are looking for the best welder for car frames, you should take a look at this article. Lets read this article....

How to pick the best welder for 1/2 inch steel? I'll review and compare the top rated welders. Lets read...